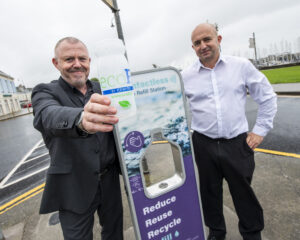 Fingal County Council. The first of nine Ecofil units was installed in Howth village and the contactless installation is now in operation at the junction of Harbour Road and Abbey Road.

The new bottle filling stations provide contactless, clean and safe water without the risk of touching high-use buttons that could increase the spread of infection. Users can simply place a water bottle into the holder and the sensors will pick up on movement and activate the machine. To further reduce the potential spread of pathogens, the ‘no touch’ design prevents the bottle rim from coming into contact with the nozzle.

Mayor of Fingal Cllr David Healy said: “Fingal County Council is committed, through our Climate Change Action Plan, to establishing a network of public drinking water fountains to help reduce plastic waste. Reducing reliance on plastic and improving water sustainability is vital as we work to combat climate change and protect our environment and oceans. This new installation has the added benefit of playing a vital role in protecting public 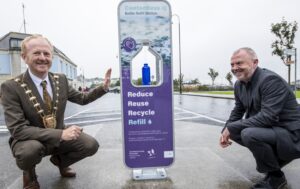 health during the Covid-19 period.”

Peter Wynne, Managing Director of Ecofil said: “The team at Ecofil are delighted to be working with Fingal County Council in the rollout of our new contactless bottle filling stations. During the height of the Covid-19 pandemic, we temporarily decommissioned our units and worked on diversifying our product range to ensure we could continue to provide access to water in a safe way. At Ecofil, we believe that access to clean water in public areas is instrumental in the fight against single-use plastics.”

Director of Operations at Fingal County Council David Storey said: “The contactless bottle refilling machines will be easy to access and use and are an environmentally friendly health and well-being initiative. As well as preventing plastic pollution and protecting the environment, there is an important element in terms of public health during the Covid-19 period as it eliminates machine contact.”

The units being installed in Fingal have digital water flow meters with remote monitoring built in, which monitors the output to determine the amount of plastic water bottles which have been prevented from entering circulation in Ireland. An analysis of fifty Ecofil public water stations in local authorities, conducted in 2019, found that 365,000 litres, or 730,000 bottles, are saved from landfill on an annual basis.