The deal will see Energia become a partner of the Guinness PRO12 Final Series, as the Championship readies itself for a thrilling end to the season.

With Dublin’s Aviva Stadium preparing to host the Guinness PRO12 Final on May 27 (see www.ticketmaster.ie), the Championship is proud to team up with Energia, one of Ireland’s leading  energy providers.

Just two rounds remain in the Guinness PRO12 with three Irish teams and two Welsh teams all vying to finish in the top four and reach the Semi-Finals. Energia’s support of the Final Series will help harness the power of the Championship’s passionate supporters to the three showpiece events with exclusive prizes for fans that will bring them closer to the game than ever before.

Dermot Rigley, Commercial & Marketing Director for PRO12 Rugby, said: “Energia is one of the most innovative brands in the Irish market and with our ‘Fan First’ philosophy it is an ideal partner for the Guinness PRO12 Final Series. We’re really excited about Energia’s plans to engage with our supporters, who follow one of the most entertaining rugby tournaments in the world.

“There is a tremendous energy to our Championship at the moment with tries being scored at a record rate and we’re delighted to have Energia join us as we count down to the Final on May 27 at Aviva Stadium. Ticket sales have been strong and all signs are pointing towards another record-setting occasion.” 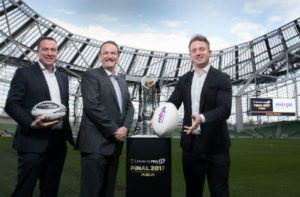 Alan Mulcahy, Head of Sales for Energia, said: “Energia has strong roots across Ireland in terms of customers, employees and windfarms. Added to that, as both our business and home energy customers know, competitiveness is a key value for us. For that reason, it was an easy decision to support this hugely important competition for Ireland’s provinces.”

“As part of this sponsorship, we’ll be giving rugby fans the chance to get closer to the game with exclusive prizes, so keep an eye on our social media channels.”

Fans from all across the Championship can also ensure their place at the Guinness PRO12 Final at Aviva Stadium on May 27 by visiting www.pro12rugby.com/final or www.ticketmaster.ie