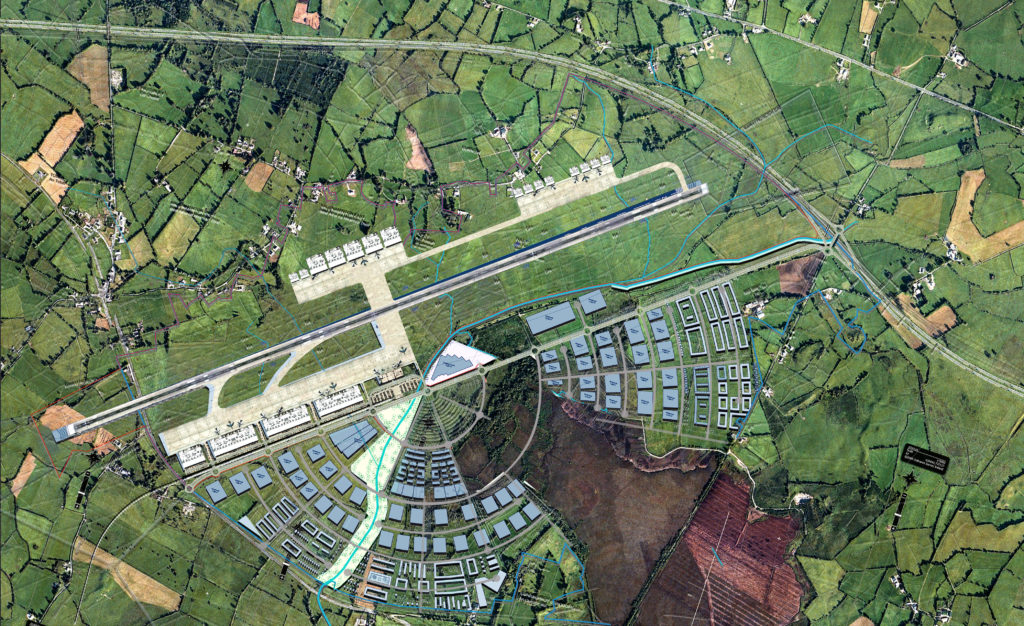 Innovation Green is a new initiative established to create the first 100% independent renewable energy microgrid in Ireland to develop a prototype “low carbon trade and industry campus”. The campus will be located in the Midlands, 15 km west of Tullamore and 23km east of Athlone and will provide a centre of excellence for companies and researchers looking to test and develop renewable and sustainable energy solutions to real world environmental problems related to trade and industry. Innovation Green has been developed in co-operation with Midlands Airport Developments ltd, InSite Bavaria, The Technical University of Munich, Siemens, Airbus (through an existing agreement with the Technical University of Munich) and Amova to deliver this project for the region.”.

The development which has the long-term potential to create up to 5200 jobs in the Midlands is to be built on the site of the proposed Midlands Airport. Today’s announcement is a key element within the overall project masterplan that received strategic infrastructure development approval in 2010. Ireland’s first 100% independent renewable energy microgrid is planned to be developed by the end of 2025, and will begin with powering the proposed campus competence centre in partnership with InSite Bavaria and the Technical University of Munich. The planned trade and distribution centre of excellence will also serve as a home to researchers and companies wishing to develop new technologies benefiting from the innovative campus technology.

The 100% green energy sources powering the entire campus industrial zone will operate as a distributed energy system and include wind, solar, waste to energy, hydrogen and anaerobic digestion. The campus will function as a “living laboratory” for autonomous cars, smart storage & distribution, artificial intelligence and other technologies.

On January 14th the EU’s regional policy Commissioner Elisa Ferreira revealed details of the €100 billion Just Transition Mechanism, a key financial component of the European Green Deal that should make the bloc climate neutral by 2050. The ambitious plans for the “Innovation Green” initiative, is a direct response to the recent closures of energy facilities in the Midlands. The development will act as a catalyst for the transition of Irish industry away from carbon intensive energy making it an ideal candidate to benefit from the new EU Just Transition Fund.

“Siemens is delighted to support this project by providing technical expertise in the areas of Smart Grid, Campus and Buildings in this exciting project”, says Gary O’Callaghan CEO of Siemens Ireland.

The “Innovation Green” idea, which has been developing together with researchers and industry representatives from Ireland and Germany, is aimed at creating safer, cleaner, smarter development zones and learning lessons that could be applied around the world. “It is key to our sustainable growth that we develop in a new way to decarbonise industry in Europe – Ireland may gain competitive advantage as an industry location by offering carbon-efficient investment sites. Considering the role that the Midlands has historically played in the energy sector, it is the natural place to start Ireland’s next chapter in developing renewable and sustainable energy” stated Daniel Gottschald of InSite Bavaria.

The plan for the independent distributed renewable energy grid on 1800 acres is a big step forward to seeing the overall masterplan being developed.

Innovation Green said it is open to partnerships with other companies seeking to use the project as a testing ground for technologies aimed at decarbonising industry in Ireland.