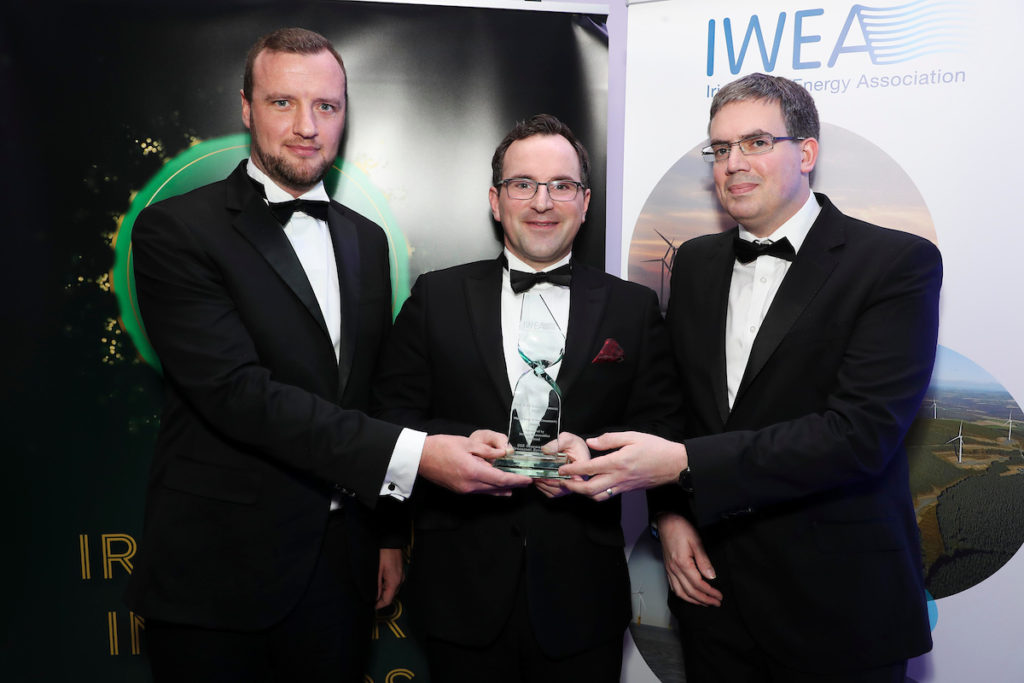 The 174MW project, co-owned by SSE Renewables and Greencoat Renewables, took home the opening award of the night for Wind Energy in the Community for the launch of Ireland’s first ever wind-powered third level scholarship. The scholarship, funded by Galway Wind Park, is set up to support students who live close to the wind park as they embark on their college education. To date, 40 students have received support from the fund.

The awards took place at a gala dinner in Clontarf Castle and were hosted by broadcaster Ivan Yates. Reflecting the comments from the award judges, Mr Yates said: “The winner has made an enormous contribution to the industry over the past number of years. Since 2008 it has invested over €2.5 billion in the development of sustainable energy infrastructure in Ireland. By setting up Ireland’s first ever wind powered scholarship they are encouraging the local community near the project to upskill themselves in areas of energy efficiency, sustainability, environmental, health, safety and social skills.”

Speaking after the awards, Barry Kilcline, Director of Development, Ireland at SSE Renewables said: “We’re delighted to be recognised as leaders in the wind energy community in Ireland and proud to be supporting students and the local community around Galway Wind Park. We’ve always aimed to have a positive and lasting impact on the communities in which we operate, and it’s great to see Galway Wind Park not only make a difference to Ireland’s climate targets but also making a genuine difference in the local area. “

Patrick Maguire Asset Manager with Greencoat Capital said: “The aim of the Galway Wind Park Community Fund is to maximise value and impact for local communities and people in the long-term. The Galway Wind Park Scholarship is designed to provide third-level education opportunities for local people to gain qualifications and ultimately build strong careers. We are delighted that the IWEA Awards have highlighted this and we’re extremely proud to have won the Wind Energy in the Community Award.”

Galway Wind Park became fully operational in October 2018 and is now generating enough renewable energy to power around 140,000 homes, while offsetting over 220,000 tonnes of harmful carbon emissions annually. In addition to a multi-million-euro Community Fund, the wind park also includes the Galway Wind Way, 48km of onsite recreational walking and cycling trails, available for community members and tourists to enjoy for generations to come.