In a year when climate change has never been more talked about, wind energy has emerged as Ireland’s strongest defence – with the Government’s own Climate Action Plan placing wind at its heart –  highlighting the electricity sector’s potential to save 8 million tonnes more CO2 annually by 2030.

On Friday 24th January almost 400 people gathered in Clontarf Castle, in Dublin to honour the men and women working in the wind industry in Ireland, who are making this climate defence possible.

Dr David Connolly, CEO of the Irish Wind Energy Association, said: “Last year was a pivotal one for Irish wind energy. In the Climate Action Plan we have, for the first time, an all of Government vision for how we can decarbonise Ireland’s electricity system.

“Wind energy provided a record-breaking 33 per cent of Ireland’s electricity in 2019 which is one of the highest shares worldwide – in fact third just after Denmark and Uruguay. It is at the heart of the Climate Action Plan with targets set for 3.5 GW of offshore wind energy and to double our onshore wind generation capacity to more than 8 GW by 2030.

“We know our industry can deliver these targets. These awards celebrate the men and women working in the wind industry who will achieve them, who are making possible Ireland’s fight against climate change.

“Through their innovation and determination, we are seeing huge positive benefits – from investment in local communities, the thousands of people employed in our industry and in cheaper wholesale electricity prices.”

Winner of the ‘Champion of Renewables Award’ Marie Donnelly, accepting her award, explains the importance of 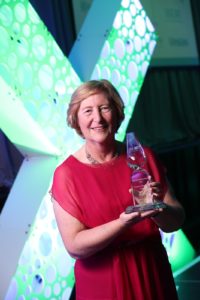 Winner of the ‘Champion of Renewables Award’ Dr. Marie Donnelly

“It’s a real honour for me. I appreciate the recognition that this award implies. And I think it’s an indication of where we are in Ireland with the energy transition. We have made great progress and we are now set to charge down the path of success here in Ireland. Renewable energy has come of age. The technology has matured and found its own place, costs have come down and efficiency is there. The reality of a carbon free system is in place.”

Voters say climate change will influence their decision on polling day – The Irish Wind Energy Association welcomed the results of an Interactions opinion poll, published earlier this year which found that 79 per cent of Irish people back wind energy. It also showed a majority of those polled – 55 per cent – said climate change would greatly or somewhat influence how they vote in the next election* More in notes to editor.

List of shortlisted nominees and winners in each category:

Sponsored by Height for Hire

Sponsored by Bank of Ireland

The IWEA person of the Year award is nominated by staff at IWEA. Paul was chosen for his outstanding contribution to policy work in IWEA through his work on various committees and working groups and his lead role in IWEA’s 70by30 Report