Aalborg Energie Technik a/s (AET) will assist MAV Elektrik to achieve cleaner air, prevent water and soil contamination in addition to providing a commercial income from chicken litter which was previously seen as a waste product.

With the high efficiency power plant, called MAV Elektrik Üretim Sanayi ve Ticaret A.S. (MAV), located in the agricultural Bolu District, the power from the plant will be produced from waste, for which there is no waste management system today. MAV is a special purpose vehicle (SPV) owned by Gülsan Holding. MAV has an agreement with local farmers to collect the chicken litter and transport it to the site where it is burned and converted to green power. The investment is part of Gülsan’s strategy to grow and diversify into power generation. 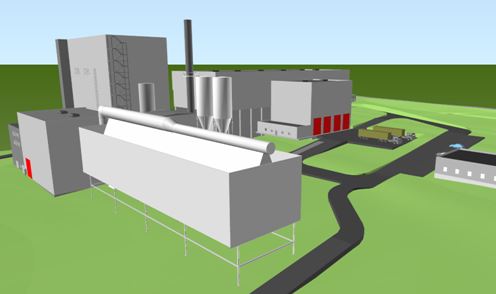 3D arrangement of the MAV project in Bolu, where a major chicken litter-fired plant will be built.

The Turkish Government motivates for green electricity and encourages chicken farmers not to dispose of chicken litter. The authorities are environmentally concerned regarding uncontrolled disposal of chicken litter, excess use of fertiliser, soil and water contamination, spread of viral/bacterial chicken diseases, risk to human health and odour from current disposal methods.

The plant will annually combust around 250,000 tonnes of biomass, which would otherwise be disposed of, and produce 35 MWe of green electricity for export to the grid instead. At the same time, the plant will produce about 35,000 tonnes ash per year, which will be used as a bacteria-free and nutrient-rich fertiliser.

Chicken is the main meat protein source in Turkey and the industry is growing rapidly. The number of farms in the region around the Bolu District is concentrated, and there is a growing waste problem from these farms. The waste from the chicken breeding cycle needs to be removed from the bird raising sheds. This bedding waste is typically a mixture of rice husk and wood chips, mixed with the chicken manure and this will provide the fuel for the new plant.

The plant is designed with redundancy in several areas to ensure a high availability and the steam parameters and superheater materials are chosen to secure a long lifetime.

The combination of the AET Combustion System and AET Biomass Boiler ensures low emissions, which comply with the European emission limits. The plant is designed in accordance with WID to guarantee the high fuel flexibility in the future.

The in-house power consumption for the power plant is only approx. 2,5% of the fuel heat input, and this increases the net power output. This enables MAV to produce more power for export to the grid.

The plant is planned to start power generation in second half of 2021.

Yusuf Özgül, Project Director, Gülsan: “We are pleased to announce that AET will be the EPC supplier for MAV. AET have the technology competence and know-how for similar sized plants and their plants have more than 25 years’ operational experience with handling and combustion of chicken litter”.

Erik Flemming Hansen, Sales Director, AET: “It’s a great step for AET to move in to the Turkish market, and AET could not have chosen a better partner than Gülsan Holding to make this move with. It has been a pleasure to develop the MAV project together with the MAV Gülsan team – from the first day there has been a constructive cooperation in a very positive spirit”.

“At AET we are very happy to be part of expanding the green energy portfolio for Gülsan Holding. The 35 MWe produced at MAV will supply green energy in Turkey to approx. 100.000 households, equivalent to a reduction of around 200.000 tonnes CO2 per year, if substituting a coal fired plant”, says CEO of AET Lars Kristensen.