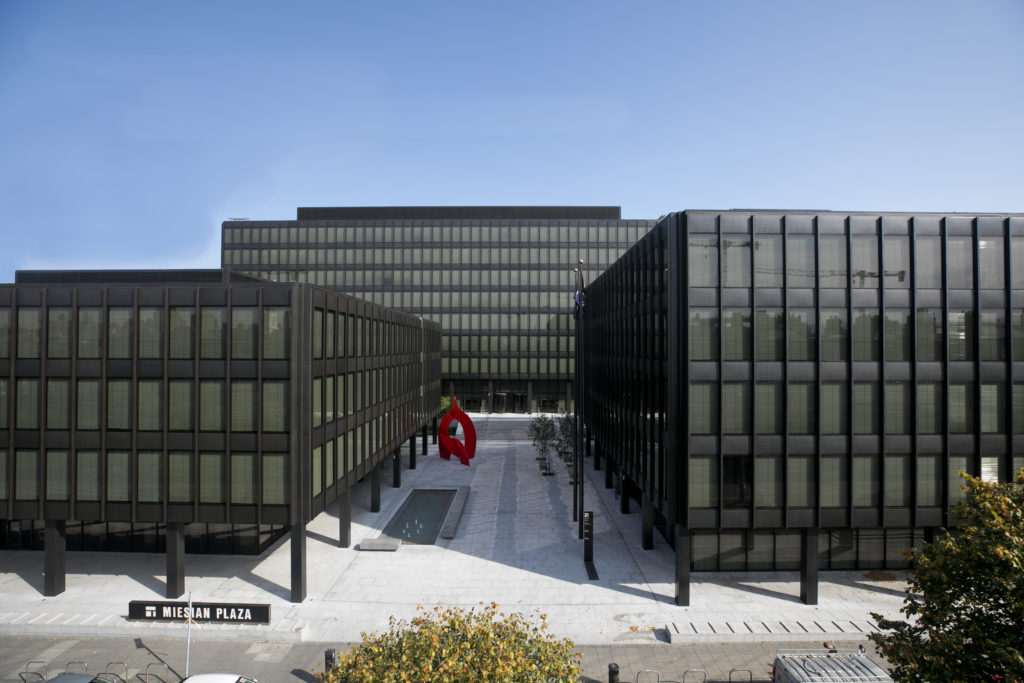 Remley was this week presented with the official LEED Platinum v4 Certification by Rhiannon Jacobsen, Vice President of Strategic Relationships and Brendan Owens, Senior Vice President for Strategic Partnership and Growth from the United States Green Building Council (USGBC) in recognition of its development at Miesian Plaza, Baggot Street, Dublin 2.  Laurence Goodman and David Torpey accepted the award on behalf of Remley.

David Torpey, Development Director, Remley Developments Limited which is part of the Parma Properties 1971 Group said: “Remley is honoured to officially receive this certification from the USGBC.  Their work to promote and recognise environmental and sustainability standards in buildings worldwide is incredibly valuable.  It is gratifying to see our considerable efforts to ensure that these three office buildings were held to the highest sustainability standards rewarded in this way.” 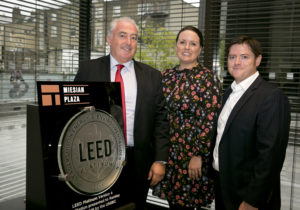 Presentation of Platinum Accreditation to Remley

The USGBC has confirmed that Miesian Plaza is the first and only development in Ireland to be awarded LEED Platinum v4 Certification in any category.  There are only 178 LEED v4 Platinum Buildings in the world and Miesian Plaza is the 179th Building.  All other developments in Ireland submitted to the USGBC accreditation process opted back in 2015/2016 to seek LEED V.3 Certification.

Leadership in Energy and Environmental Design (LEED) is the most widely-used green building rating system in the world.  LEED is an independent building certification accreditation system run by the USGBC.  There are four LEED certification levels, Certified, Silver, Gold and Platinum. LEED v4 was initiated by USGBC in 2013.

To secure LEED Platinum v4 accreditation, Miesian Plaza was assessed by USGBC for:

Miesian Plaza includes three office buildings of approximately 240,000ft2 of Grade A office accommodation, constructed between 2014 and 2017, including tenant fit-out, all finished to an exceptionally high standard.  Block 1 is occupied by The Department of Health, The Department of Children and Youth Affairs and The Department of Finance; and Blocks 2 & 3 are occupied by Takeda Pharmaceutical Company Limited.  Remley is satisfied that its tenants will reap the benefit of the LEED Platinum Version 4 accreditation awarded to the development, by virtue that the energy consumption is substantially less than buildings which could not secure such LEED accreditation.