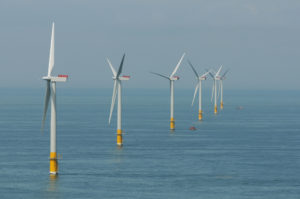 The 504MW Greater Gabbard offshore wind farm off the coast of Suffolk in the UK, co-owned by SSE and Innogy.

SSE Renewables has announced that it has submitted Foreshore Licence applications for approval to carry out survey works to assess the suitability of two new separate offshore wind farm sites in Irish waters, which could generate over 1.5GW of renewable energy combined.

The leading renewable energy developer has applied to the Irish Government to carry out site investigation works to assess the suitability of 444 sq km of sea area off the Port of Drogheda in the north Irish Sea for the potential development of an offshore wind farm. The site would be capable of generating around 800MW of renewable energy in water depths suitable for fixed turbine installations. The potential site is located approximately 18km from both Dunany Point in Co. Louth at its most northern point, and from Braymore Point in Co. Dublin at its most southern point.

To the south of the country, SSE Renewables has applied for a separate licence to survey a 689 sq km area off the Waterford and Suir Estuary for an additional 800MW offshore wind development. Situated approximately 25km offshore in the Celtic Sea, the water depths potentially make this site suitable for the deployment of emerging floating wind turbine technology.

SSE Renewables is the leading developer of offshore wind energy in the UK and Ireland, with 3.3GW of consented projects in UK and Irish waters. Its consented pipeline includes Phase 2 of Arklow Bank Wind Park off the Co. Wicklow coast in the south Irish Sea, which is being actively developed by SSE Renewables and has the potential to generate around 800MW of green energy.

The two site locations have been chosen following a phased site selection process which included regional resource and constraints analysis and an assessment of renewable generation capacity requirements. In addition, preliminary shipping and navigation assessments have been undertaken to ensure that any navigational risks are fully understood, should the proposed areas be taken forward for development. These assessments have informed the position, size and shape of each of the proposed areas to be surveyed.

As part of the assessment process, SSE Renewables intends carrying out geophysical, geotechnical and environmental surveys of the prospect areas. This will include detailed mapping of nearshore shallow geological and seabed character; reconnaissance level mapping of seabed relief and features; and baseline environmental mapping.

To minimise the risk associated with poor winter weather conditions, SSE Renewables intends completing most of the proposed site investigation works between April and October within the five years following the award of both Foreshore Licences.

The applications for non-exclusive Foreshore Licences are being made to Ireland’s Minister for Housing, Planning and Local Government for approval under the State’s 1933 Foreshore Act. Full details of the applications are available at the Department’s website at www.housing.gov.ie, and a public consultation process will commence in the coming weeks.