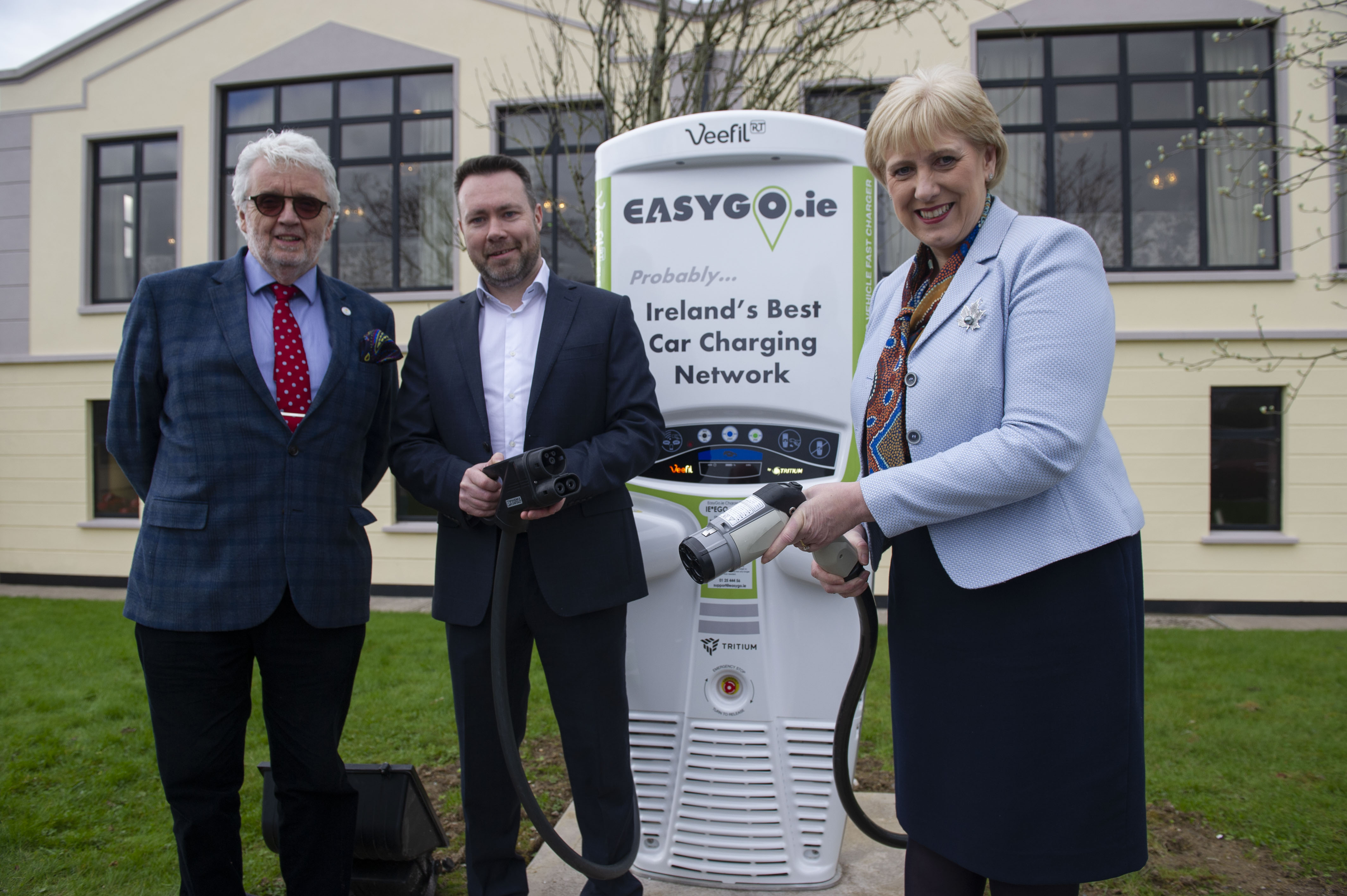 EasyGo.ie has deployed a Veefil-RT 50kW DC rapid charger from world-leading DC charging technology specialist, Tritium. The successful installation marks the first deployment of a rapid charger in Ireland on a new site in some time, and the first deployment of a 50kW DC public charger on a private network in Ireland. The charger, the most advanced of its kind with the smallest physical footprint in the world, can add 50 kilometres of range to an electric vehicle in just 10 minutes.

EasyGo.ie, founded in 2018 by Chris Kelly and Gerry Cash, also announced plans to install 88 of Tritium’s DC rapid chargers by the end of 2020, with at least 20 to be deployed by the end of 2019, leading to the creation of up to 50 new jobs in operations and customer support.

“Sales of new EVs in Ireland have increased by 541 per cent this year alone, so it’s clear we’ll need more charge points to cater for an increase in EVs on the road,” said EasyGo.ie co-founder, Chris Kelly. “EV drivers are always looking for places to charge and the availability of this and future rapid chargers will help ensure drivers have options across Ireland, from Malin Head to Mizen Head.”

The charger was unveiled at a ribbon-cutting ceremony at the Four Seasons Hotel in Monaghan yesterday afternoon.

“We’ve always strived to serve the present and future needs of our customers by staying ahead of the curve, and the world is trending closer towards a zero-emissions, electric vehicle future,” said Frank McKenna, Director, Four Seasons Hotel Monaghan. “We worked with EasyGo.ie to install the charger at our site because we want to cater to EV owners who will need to charge their vehicles not only quickly, but in comfort and style; while their car charges, they can avail of all the facilities that the hotel has to offer.

“This is the future of travel in Ireland, and the selection of our hotel as the first site to have a rapid charger installation in a number of years is a testament both to EasyGo.ie’s foresight and our ethos of providing the best service to our guests.”

The Ceremony was attended by Minister for Business, Enterprise and Innovation, Heather Humphreys T.D.

“The deployment of the EasyGo.ie DC rapid charger is yet another step forward in our efforts to combat climate change,” said Minister Humphreys. “Ireland has been a leader in the eMobility space for some time, and with EasyGo.ie entering the market and establishing itself quickly with installations such as this one and those planned for the future, Ireland will continue to lead the way.”

EasyGo.ie partnered with Tritium to leverage Tritium’s expertise in design, deployment and engineering, combined with its superior backend consultation and support capabilities. Tritium has installed chargers in more than 29 countries and its Veefil-RT is considered the most advanced charger of its kind in the world, with the smallest physical footprint – ensuring installation can be undertaken unobtrusively and successfully in areas where real estate or space is at a premium.

“It’s been proven time and again the world over that the installation of publicly-available rapid charging options leads to greater EV uptake,” said Kevin Pugh, Business Development Manager for Tritium, UK and Ireland. “With EasyGo.ie planning to install chargers at 88 sites in two years, you’ll start to see a noticeable increase in EV adoption and this will have a major impact in helping Ireland achieve its climate change goals. People see publicly-available chargers and begin to recognise that, as the infrastructure is being put into place, EVs are clearly here to stay.”

Each Veefil-RT DC rapid charger features a modem which can alert EasyGo.ie and EV drivers – using the EasyGo.ie web app (with a native app coming soon) – in real-time if the charger is available or not.

Michael Lennon, President of the Irish Hotels Federation (IHF), said the installation is another significant step towards a greener future for Ireland.

“Ireland is experiencing challenges in meeting its climate change targets with the prospect of paying substantial fines. As a sector, we recognise that we can be part of the solution and many hotels are already making substantial efforts to further improve their sustainability,” said Lennon. “The IHF is taking an active role in this area and has formed a Sustainability Committee to develop new policies, practices and initiatives to help our industry play its part. Ireland is approaching an electric vehicle future and I commend the Four Seasons Hotel for embracing rapid charger installation.”